A Short History of Braces 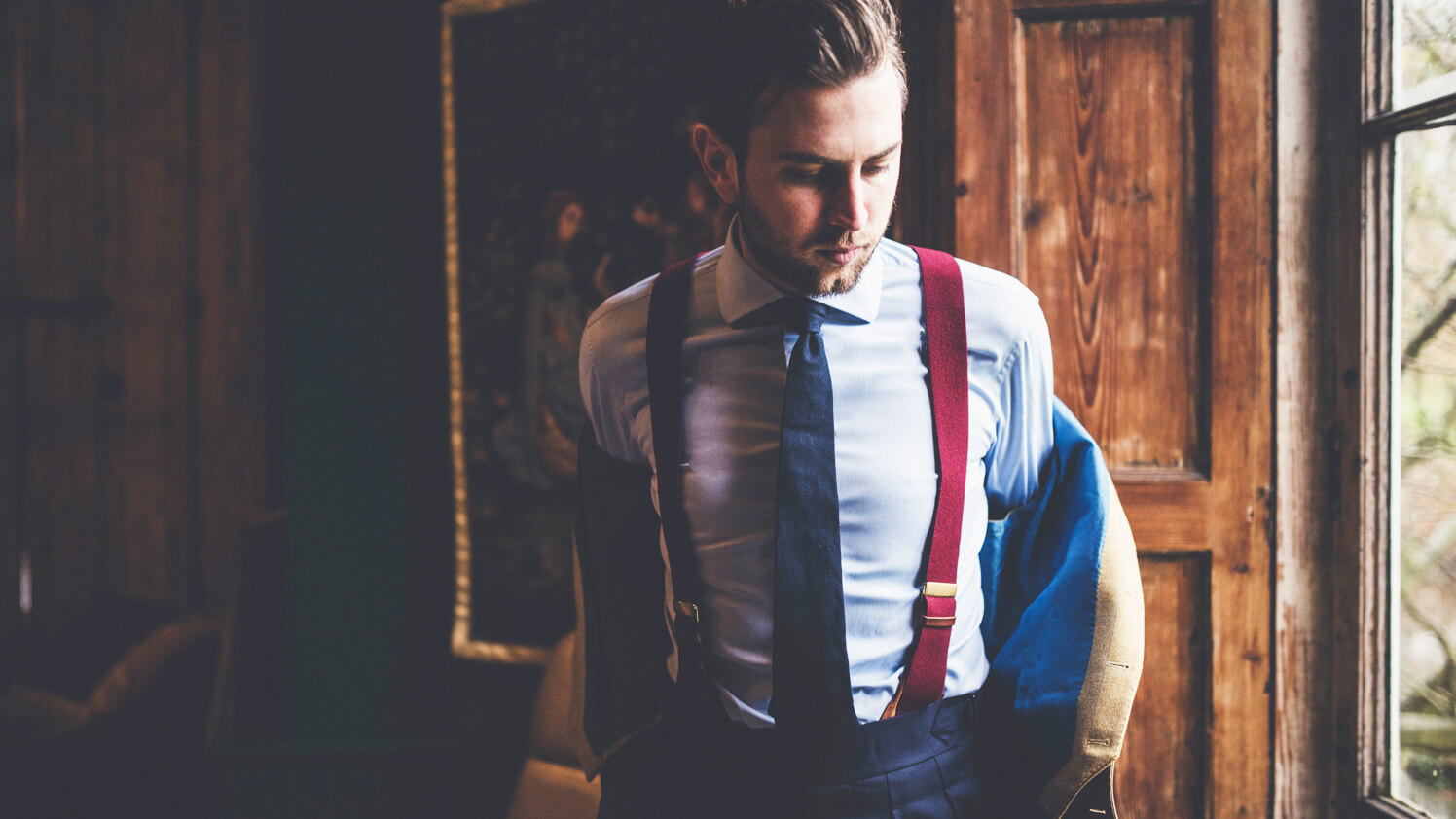 The history of braces is tightly attached to the history of trousers, if you forgive the pun. Back in the eighteenth century, men in the western world mainly wore breeches and braces evolved as a practical solution to hold them up.

In the late 1800s, the sweeping effects of the French Revolution meant breeches and elaborate trimmings in clothing were linked to the “ancien régime”. Subsequently, male dress became far more practical, less embellished and with an emphasis on quality and fit – the latter achieved mainly via the skill of London’s tailors and their finely honed expertise.

It was at this time that the modern practice of dandyism first appeared in both London and Paris, changing the history of braces for good. Snug fitting clothes became the hallmark of the dandy, none more famous than George “Beau” Brummell.

From 1900 to the 1930s, the fit of men’s trousers became far looser as bought trousers were only roughly sized to fit. Wearing second–hand trousers was also common at this time and since men’s trousers had no fitted waists or belt loops, braces were the universal method used to ensure a satisfactory fit. 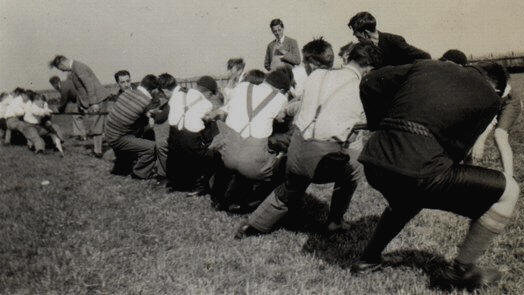 The introduction of the first self-supporting trouser waistband in the 1930s, by Alex Simpson (son of Simeon Simpson, the founder of DAKS and Simpson’s of Piccadilly), was to have severe repercussions on the necessity of wearing braces. With the fit of men’s trousers now much improved, it looked like the long and triumphant reign of braces was over.

However, remarkably, this proved not to be the case. Braces began to be worn as a statement piece, defining a certain look or style by some groups in society. Most notably, the skinheads of the 1960s and 1970s wore braces as an integral part of their “street look” (along with their shaved heads, drainpipe jeans, granddad shirts and Doc Marten boots). 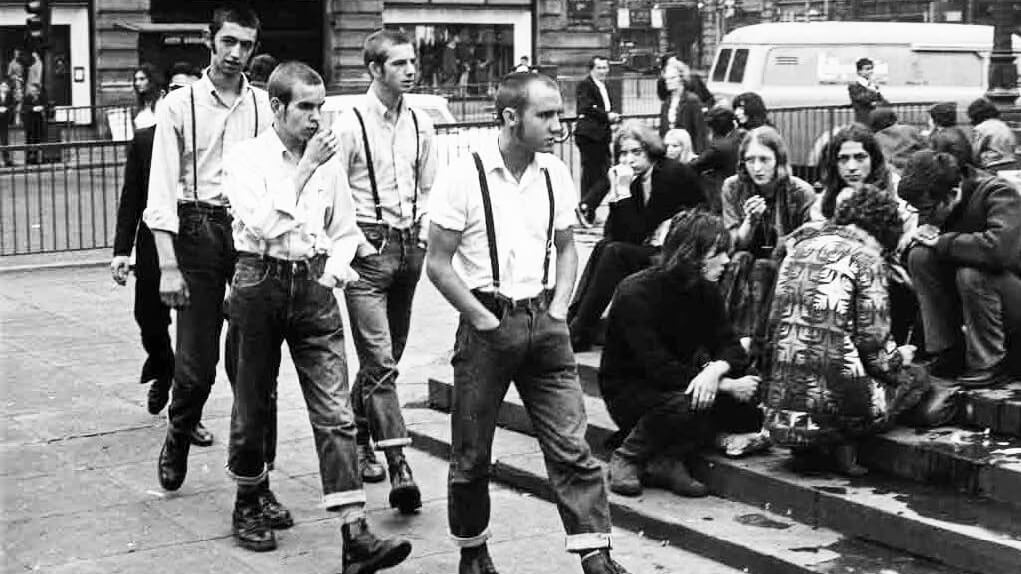 Taking on a new lease of life in the late 1980s, red braces became synonymous with the financial sector after the film “Wall Street” was released in 1987, further embellishing the rich history of braces. The film’s main characters, Gordon Gekko (played by Michael Douglas) and Bud Fox both sported red braces when echoing their mantra that “greed was good”. Adopted by many financial workers of the day, this red braces association with the City still prevails and saw sales in this shade declining after the global banking crisis of 2007.

Braces remained a staple of the elderly gents’ wardrobe throughout the years but we have seen a definite upsurge in interest from younger clients more recently. With contemporary dandyism at the fore, and its considered dressers demand for individuality, quality and style, braces are enjoying a much deserved revival.

If you are already a history of braces connoisseur, you will know there are none better than Albert Thurston. Making and selling braces since 1820, Albert Thurston received an Honourable Mention at The Great Exhibition of 1851 for the excellent standard of their products. Still the last word in quality gentlemen’s accessories, their braces continue to be worn by royalty, celebrity and those in the know who are considered dressers with an eye for detail. 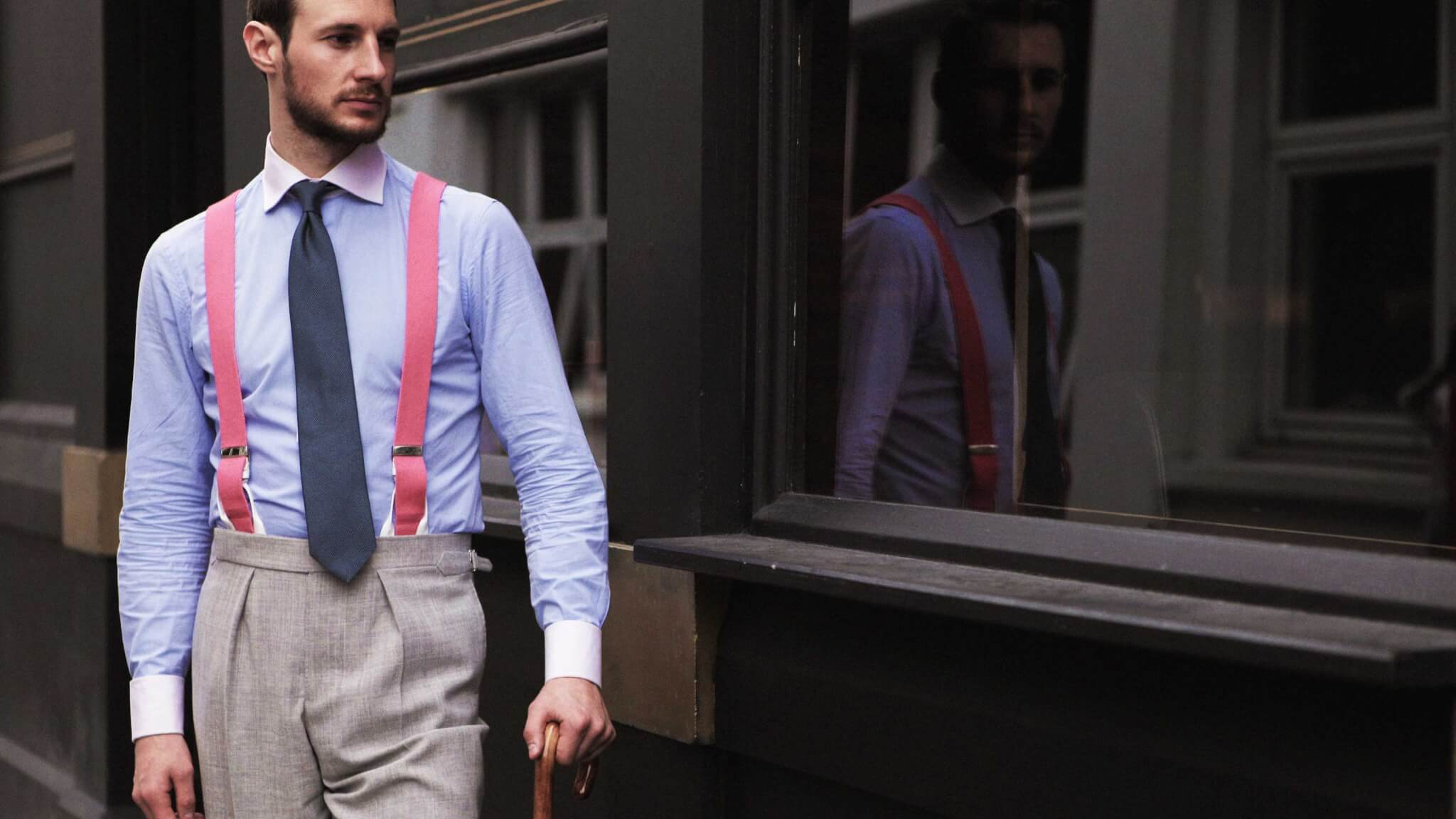 From workday staples to our specially commissioned limited edition collections, we stock a full range of Albert Thurston braces, selected with our customers in mind. ‘X’ backed with tabbed leather ends, these braces are button fastening, ensuring a secure and reliable method of holding up your trousers. 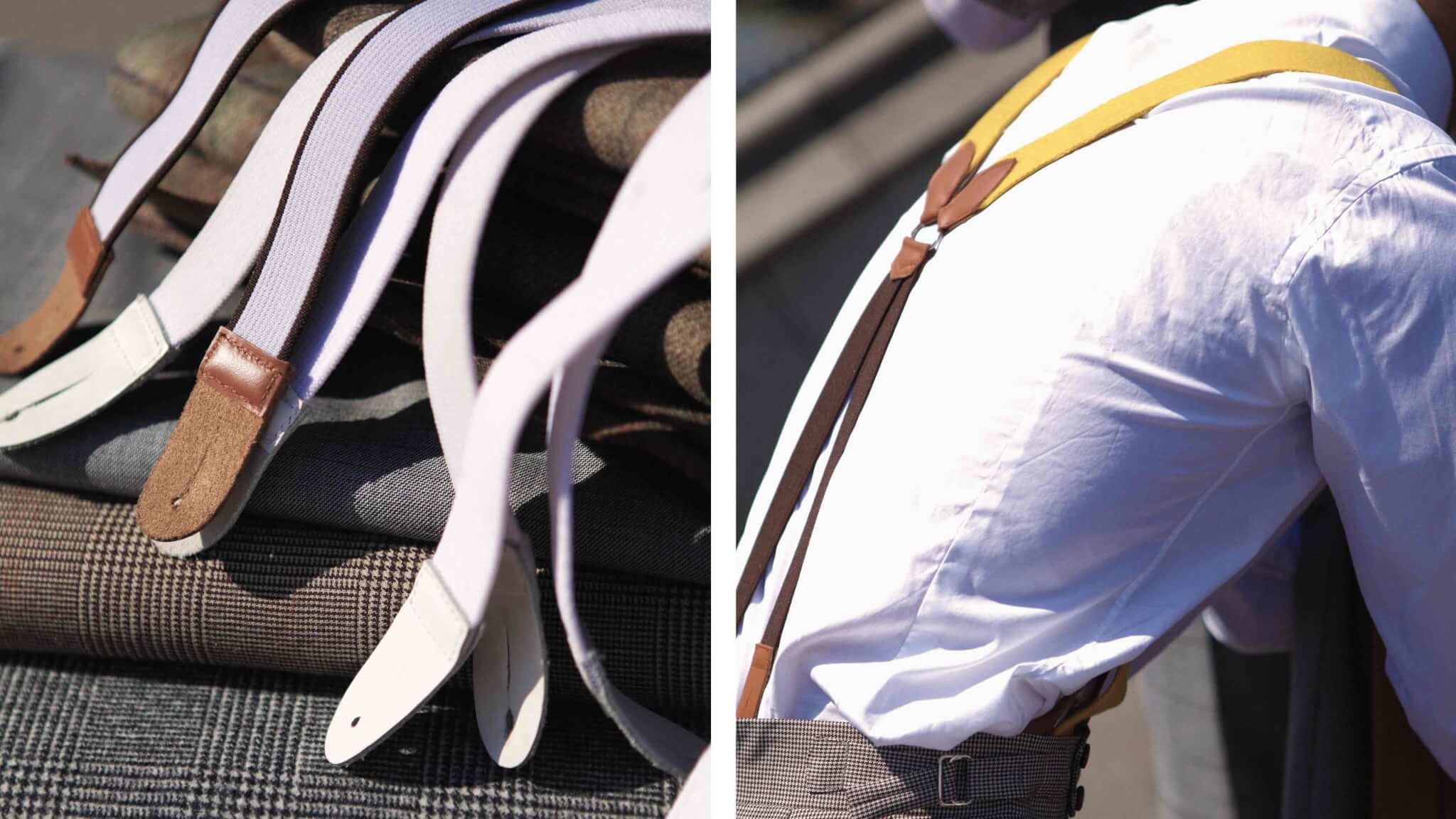 Our collection mainly consists of Boxcloth braces in a variety of colours. Boxcloth being the ultimate fabric for keeping out the cold in the 19th century. Still woven in Yorkshire today, the cloth is finished by being shrunk to half its original width. This tightens the cloth, allowing it to be used for making this ultimate classic brace. Another benefit of boxcloth means the length of the ends can simply be cut to fit. 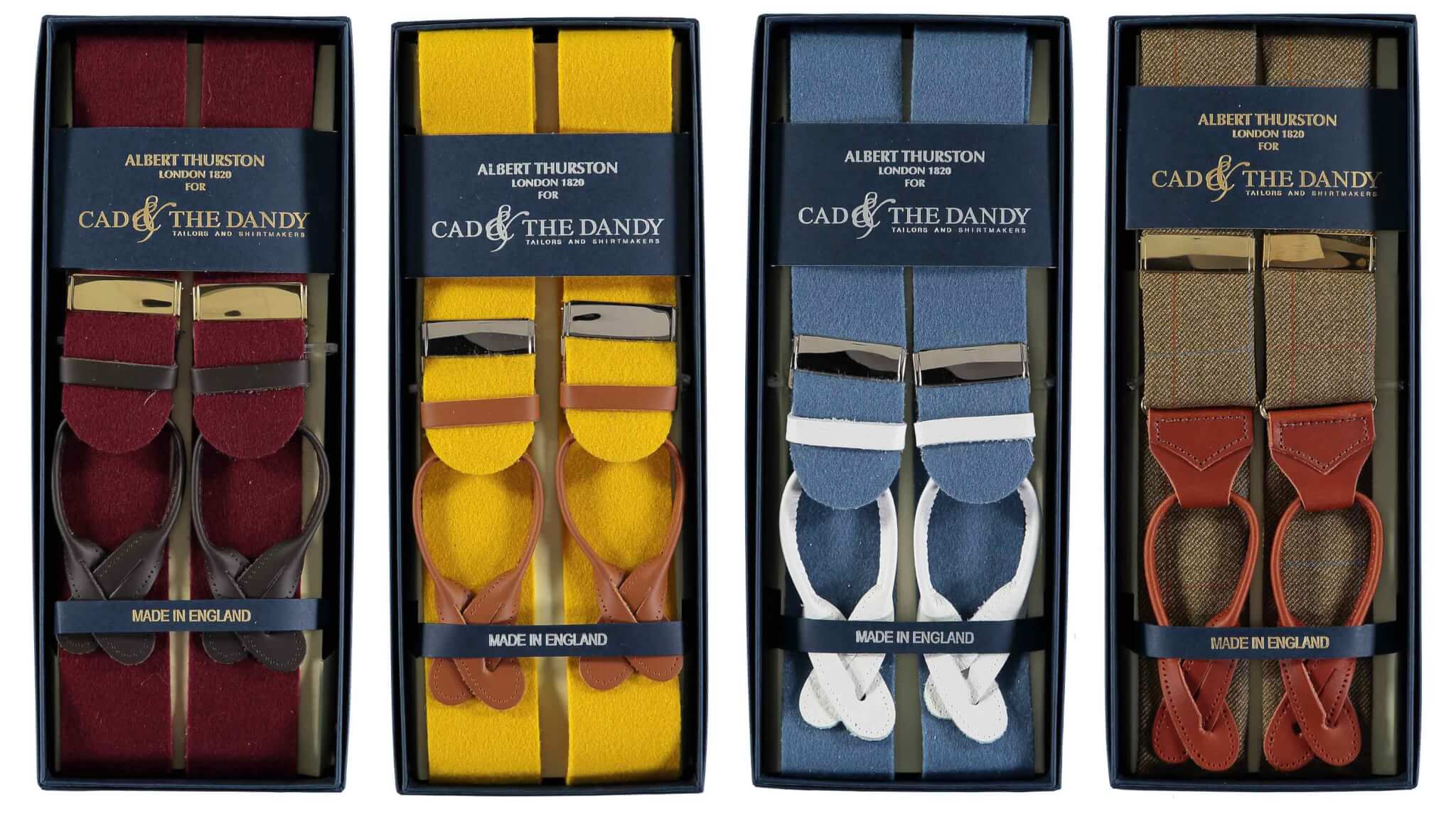 Finished with soft leather ends and either gilt or nickel fittings, our collection also incorporates limited edition tweed braces and silk moire dress braces. Whatever your look and whichever you choose, donning a pair of Albert Thurston braces is guaranteed to set you apart from the crowd.